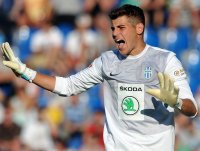 The season 2013/14 ended in the best possible way. FKMB reached the 3rd place in the Gambrinus league, which leads to Europe and Hido got the honor to play the last two games for his club.
The first game he completed against this year's convincing Czech championship AC Sparta Prague and that with a great performance in front of over-crowded ranks. Coach Jarolim, father of Hido's team-mate David Jarolim, praised him directly in the press conference, which is not usual for him.
In the second game FKMB met FK Pribram, where Hidajet got the opportunity to show his skills.
With these two games in the Gambrinus league, Hido has gained immense experience for a 19-year-old goalkeeper.