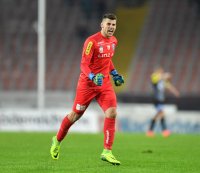 At the end of the season 2016/17 of the Sky Go First League Hido was voted the 2nd best goalkeeper in the league. With a score of only 3 more goals which Blau Weiss received in comparison with the city rivals LASK, who also won the championship title at the end. In front of 22-year-old Hidajet landed at first place the 29-year-old Pavao Pervan from LASK, currently keeper of VFL Wolfsburg - German Bundesliga. Third place went to 26-year-old Christopher Knett of Austria Lustenau.